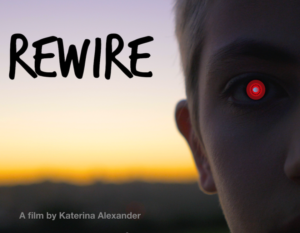 The Media Resource Centre is proud to announce it will host 2019 Tropfest Junior winner, Kat Alexander, at the upcoming Screen Makers Conference in Adelaide as part of her prize package.

15-year-old Kat of Pearl Beach, New South Wales, impressed judges with her short-film entry, Rewire; a Pinocchio-like tale of a female humanoid who breaks free from her maker’s oppressive programming.

The award represents years of hard work and creative experimentation for the teenager, who began making films at just 9-years-old.

“It didn’t even feel real. It was a very ethereal, out of body experience. I just remember my heart beating very fast and a huge smile breaking over my face,” Alexander said.

“I was so proud of everything that had gone into the film and was happy to see it succeed.”

Alexander says the film is a feminist take on expectations surrounding femininity and hopes it will prompt viewers to think more deeply about societal constructs.

“Rewire is about a robot who challenges her own hardwiring and the way in which women are perceived in society,” she said.

“For me, it’s a reflection of some incredible women and their stories and the ways they have inspired me,” Alexander said.

It’s the culmination of the writing, editing and storytelling skills she has developed over the course of her journey as a film maker, which started out as a childhood hobby.

“The first film I ever made was a short film about elephant slugs,” she said.

“I got a bunch of my friends and during school, we got together and shot the whole thing,”

“I haven’t seen it since then, but I really want to have a look for it because I just know it’s hilarious,” Alexander said.

She notes that although it can be tough for young people to break into the industry, it’s important to keep moving forwards, because success may be just around the corner.

“I submitted films into Tropfest for years and didn’t get in, but I made one every year and eventually got selected as a finalist in 2018, and this year, I won,” Alexander said.

Her prize includes two tickets to this year’s Screen Makers Conference, supported by the Motion Picture Association, where she’ll get the chance to mingle with some of the most influential figures in Australian film and TV. Additionally Kat has received $1,500 in cash, a 12-month cinema pass and a Western Sydney University studio package valued at $12,500.

“I am really looking forward to being around people that I can learn from, and to gaining a professional understanding of the industry,” she said.

In future, she hopes she will get the opportunity to work among the greats, perhaps on a production like her favourite movie, Baz Luhrmann’s Moulin Rouge!

“It really is a masterpiece, it’s just stunning, and one day I hope to be a part of something that magnificent.”