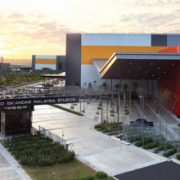 Governments and creative economies: building for the future

Governments often incentivize specific industries, such as agriculture, textiles, or petrochemicals, because of the jobs those industries help create and the wider impact on societal development from having created those jobs. This is particularly true for the entertainment industries, and most notably for content creation. When governments lay the groundwork for sustained economies correctly, the results are often encouraging. A long term view in this regard provides a more realistic perspective than a quarterly profit and loss report does, and governments should always keep this in mind.

Film and television productions stimulate both local economies and international reputations, and are a good business for any government to support. Aside from utilizing the full capacities of a modern, fully-equipped sound studio, such as Pinewood Iskandar Malaysia Studios – a joint collaboration between Pinewood Studios and Khazanah Nasional, the Malaysian government’s investment arm and the one I’m fortunate enough to run – and the skilled workers there that keep everything running smoothly, there are innumerable trickle-down benefits that accrue to local businesses in the surrounding area whenever Hollywood comes to town. For example, big productions such as Marco Polo – which recently completed the shooting of Season 2 at the Studios – require a variety of goods and services: accommodation of various sizes and durations, from hotel suites for main cast to serviced apartments for crew; from cars for getting around to cranes for hoisting lights on set; and raw materials from wood, plaster and nails for set construction to sufficient meat, vegetables and potatoes to feed, in this case, literally a (“Mongolian”) army and hundreds of crew. Most of these goods and services are sourced from local vendors, catalyzing the surrounding economy.

More than twenty-five national governments around the world, including Malaysia, have recognized this phenomenon and created tax and production incentive schemes to attract film and television projects into their back yards.

Depending on the jurisdiction, the scheme might take the form of a tax credit, or exemptions, grants and subsidies, fee waivers, or cash rebates. The Film In Malaysia Incentive (more colloquially known as “FIMI”) dates back to 2013 and provides a 30% cash rebate on Qualified Malaysian Production Expenditure for both domestic and foreign productions under specified conditions and guidelines. Producers take incentive schemes like these into their careful consideration when they decide where to film a scene, or a show, or a series.

FIMI has undisputedly helped attract two seasons of production of the epic Marco Polo series, which has made full use of our state-of-the-art facilities in Johor Bahru, which include the largest deep water and green screen tanks in Asia, to help bring the story alive. It’s a blockbuster show, often larger than life, enjoyed by audiences around the world that’s helped put Malaysia into the international arena. The production has generated a tremendous amount of economic stimulus for the State of Johor Bahru. Over 40,000 hotel room nights were booked for Season 1. For season 2, a nearby newly opened serviced apartment hotel, benefited from maximum occupancy within weeks of its opening. 3 car companies pooled resources and provided over 300 rentals cars. F&B outlets at the Puteri Harbour marina, a 5-minute drive from the Studios, enjoyed bustling sales in the evenings or even in the late hours as crews returned from a late shoot. Even Legoland, a few blocks away, benefited with crew popping in with their visiting children.

It’s also created a sustained, knowledge-based pool of skilled labor that is gaining international reputation and renown. Several of the local crew from Season 1 went on to work on international projects before rejoining in Season 2. These are skilled, highly valued talents that command comfortable wages and afford a higher standard of living and spending than many other professions. And these combined factors – technological investments, technical expertise, local economic benefits, and international recognition – promote both creativity and enhanced domestic output. That’s why film incentives are a sound policy for governments, and why governments need to embrace them as a sound, long-term investment that will stimulate infrastructure development for the country’s long-term benefit.

Sometimes, though, sound policy can fall victim to practical politics or short-term insecurity, leaving the best plans of mice and men to go awry. Businesses depend on certainty and predictability for their planning. Businesses don’t generally like surprises, or the unknown. Yet politics aren’t always given to permanence and this is where the conflicts can arise. We’ve seen this happen in various places around the world, such as when a new administration succeeds a prior opposition and seeks to reverse or eliminate all of their predecessors’ policies seemingly for no other reason than to discredit the opposition, often prompting uncertainty in the marketplace.

In the U.S., for example, the State of Illinois announced last November that it was reinstituting its lucrative Film Tax Credit scheme following its deferral by the state senate several months earlier. And while this is good news, the devil in the detail was a corresponding announcement by the state that tax credits for new projects would not be certified or able to be claimed unless and until the state enacted its FY2016 budget. Political uncertainty last year in Colorado also prompted similar concern amongst producers looking to film there. Such on-again/off-again pronouncements leave producers scratching their heads. A crisis in confidence amongst the producing community can spread like wildfire, and can be enough to get them looking elsewhere.   Conversely, decisions by states like Georgia and California in 2014 and 2015, respectively, to enhance their schemes stand out at the other end of the political spectrum.

In order to maintain international competitiveness and continue attracting the likes of Marco Polo, Asia’s Got Talent, and other productions from the next signature TV series and blockbuster to more modest Independent or Asian productions to Malaysia and with the foregoing caveats in mind, the Government should seize the opportunity to confirm its commitment to creativity by making FIMI permanent, or at least announcing publicly its availability for a 5-year minimum guarantee, rather than leaving it open to question every year by means of speculative annual renewal funding. Film incentives are not a finite, zero-sum game measurable on a quarterly basis and governments that see it that way are myopic. Building a holistic infrastructure to support continued international investment and keep Malaysian film crews and facilities on the world’s radar screen will yield immeasurable benefits years from now.

Regional competition throughout the Asia-Pacific is fierce, with Australia, New Zealand, Singapore, and Thailand all offering comprehensive arrangements within their shores. It’s not difficult to imagine more productions migrating there, rather than to Malaysia, if the Government here gives any indication of losing resolve or reconsidering its support for the Film in Malaysia Incentive. As a proud Malaysian confident of the studio’s ability to deliver at an international standard befitting the iconic global Pinewood Studios brand, I would hate for that to happen. We’re committed to establishing Malaysia as a destination for international filming, to providing employment opportunities for artists and local crews and the rest of the production ecosystem, and enhancing the country’s reputation as an efficient and cost-effective hub for the creative industries. Let’s hope that our friends at Putrajaya take the same view.

Rezal A. Rehman is the Chief Executive Officer of Pinewood Isakandar Malaysia Studios.